Just when you think it can’t get any better, this year’s competition was even better than last year’s and the year before!

Here are the FOUR HUGE reasons why it was even better: 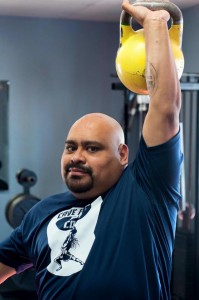 First, due to the heart-breaking news that our kettle-brother Philip Gutierrez passed the day before the competition, on Friday the 26th of February 2016, this Cali Open memorialized, celebrated, and became a lift for Phil and his family and friends. With a black sash draped above and the platforms every lifter felt the spiritual presence of an incredible man of God, and mentor to many. The Lobue family was closest to this man and his incredible legacy, and they came down from Central California to represent for Phil. An amazing moment of silence followed by an empty platform with a single chalked bell sitting on the platform, represented Phil, while the entire audience paid respect to this man for a full ten minute set started this incredible day of firsts. The weekend ended with donations, prayers, and respects paid to man of great character, Philip Gutierrez.

Second, a huge showing from our lady lifters, with over 50 females lifting double bells! This is the first WAKSC kettlebell sport competition where women and girls lifted two kettlebells instead of just one. They proved any of the naysayers wrong with their incredible results in Jerk and Long Cycle, many lifting more reps than most male lifters, lifting the same weights. Notably, Kimberly Fox set an Absolute Record in Long Cycle with two 24 kg kettlebells by driving forward to 61 reps like the professional she is. This enabled her to achieve Master of Sport International Class according to Ketacademy Ranking Standards (the Competitive Rules and Ranking Standards of the World Association of Kettlebell Sport Clubs). Some of the other incredible women of the day were: Brittany van Schravendijk of KOR Strength and Conditioning Kettlebell Club lifting two 16kg Long Cycle for 103 reps; Mia Lobue of Girevik Gear Club lifting two 4kg Long Cycle for 79 reps (she is 6 years old); Chelsey Marr of Texas Kettlebell Academy lifting two 28kg Long Cycle for 26 reps, and so many others! Check out the video below to see the greatest flight of the day!

Third, over 150 lifters from all over the nation and World united to lift kettlebells and embrace friendships past and present. Again, the California Open Kettlebell Championship proved to be a World contender for most attended kettlebell sport competition. With lifters flying into Costa Mesa, California’s very own Innovative Results (IR), to lift in Orange Kettlebell Club‘s (OKC) greatest kettlebell sport championship for the fourth year in a row. John “Wild” Buckley, Nazo, and Jason Dolby proved to the World of Kettlebell Sport lifters that they will offer a well-organized competition, under the sanctions of World Association of Kettlebell Sport Clubs (WAKSC) within the rules and rankings of Ketacademy, and deliver above-and-beyond in uniting this sport with friendship, love, and passion! With Denis’s hugs, Rachinski’s heart, and and the OKC Chu (or Spirit). this event over-delivered again to all lifters and observers both in-person and online with a flawless livestream of every lift of both days. Being a part of the WAKSC Grand Prix, this event is sure to get better every year. 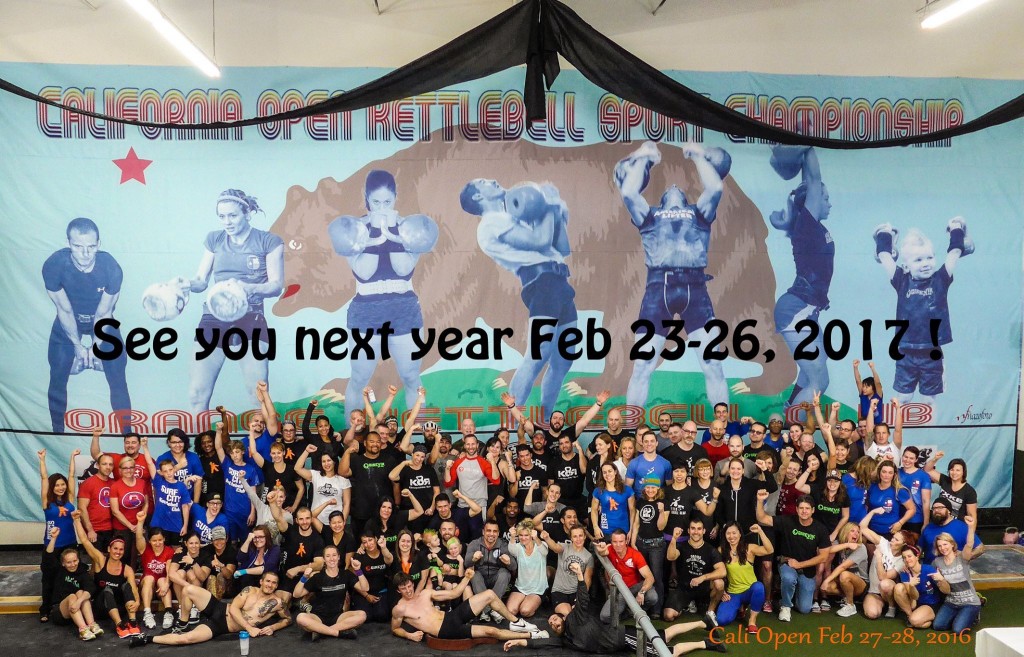 Whether you are a kettlebell lifter or are interested in this fast growing sport, you have an opportunity to attend another ground-breaking, record-smashing, and World-uniting event this coming year. Place this event on your calendar and don’t miss the best kettlebell sport event of the year!