With Kettlebell Sport (Girevoy Sport) quickly on the rise to mainstream popularity, the Innovative Results Team and Family is making their presence known from the very beginning!

As the host for The California Open Kettlebell Sport Lifting Championship, OC’s Fitness Playground has become a destination for competitors across the globe bringing in people from all over the United States, Russia, Brazil, Australia, and Japan (just to name a few).

So, just how does Orange County’s very own lifters hold up against the competition? I’d say they’ve fared pretty dang well, check it out!

After claiming the American Record in Men’s Amateur Biathlon in 2014, IR owner Aaron Guyett took on Men’s Professional Long Cycle at the 2015 California Open yielding 53 reps with 32kg kettlbells. This showing tallied Aaron  as the highest USA coefficient lifter sending him on the road the the IUKL World Championship in Ireland this November, but first, CHICAGO. 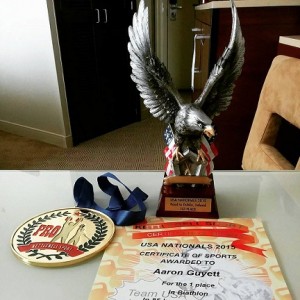 Just last month (July 2015), Aaron traveled to Nationals in Chicago to punch his ticket to the IUKL World Championship. Returning to Biathlon in the Men’s Professional Division, Aaron took 1st in the 85kg weight category with 32kg bells, earning him a place on Team USA and the opportunity to compete at Worlds’ in Dublin, Ireland (November 2015).

The week after Aaron’s return from Chicago, 5 members of IR’s Kettlebell Crew headed up north to take their platforms at the 2015 Northern California Open. Let’s see how they did!

Looking for More Information on Kettlebell Sport? Here is some recommended reading!

I’ve Got a Fever and the Only Prescription is More Kettlebell
Is Kettlebell Training for Me?
Top 10 Reasons Why IR Uses Kettlebell to Get You to Your Goals