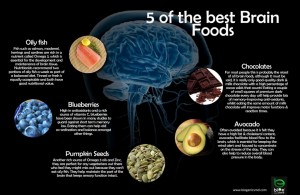 Muscle isn’t the only thing in our bodies that needs a boost. Our brain will also need a good recharge throughout the day.

Our ability to think creatively and clearly is being side-lined by our busy, daily workload. Being glued to the TV, computer, or phone screens doesn’t help our brain either. What can we do to have more creativity and think more clearly? How do we hit reset?

The Right Foods to Boost your Brain

It’s time to reboot our brains! We can’t think of a better way to do it than to EAT! Eating the right foods can help to boost your brain power.

Sure, exercise is a great way to get a cognitive boost. But you get the most when you pair exercise with your nutrition. These 7 clean, brain-boosting foods are key. Eating these will get you on your way to a more productive day.

Feeling a bit sluggish throughout the day? Set down that caffeine-filled cup and try out one of the SEVEN foods to boost your brain power. You’ll get the surge without the crash. You’ll have that energy you need to get things done during the day.

Add a few of these key foods in your daily meals to give a good boost to your brain power. A little goes a long way to help your brain improve. You won’t be needing just caffeine to perk you up!

Have questions about the foods to boost your brain power? Want to improve your nutrition? Our knowledgeable coaches can help you design your ideal nutrition plan.

These days over 50% of American’s food budget is spent on dining out.  The majority of those dollars are spent at fast food restaurants.  As America gets heavier and less healthy, restaurants steer their marketing toward creating healthier menu items, but are they really healthier?

Recently, KFC released their grilled menu items as a healthier alternative to their fried chicken.  Is it really healthy?  The truth may surprise you.  Check out this article.

Finding healthy foods has become increasingly difficult.  Our advise is to stick to the basics:  If it occurs naturally, eat it.  The more man touches it, run!  Avoid fried foods, sugary drinks/sodas and tons of starchy foods (breads, potatoes, etc).

The majority of your foods should consist of vegetables, healthy proteins, good fats, fruits and other naturally occurring foods.

Here are a couple tools that may help you make better choices:

5 Worst Foods You Can Eat

Remember, its not all about fad, drastic diets and going without.  Its about making continuous improvements to your eating habits and learning how to incorporate better choices into your crazy schedule.

Do you have more healthy eating tips?

We would love to hear about em..leave us a comment

Need some accountability in your nutrition plan, and workout routine?  Fill out the form below and a member of our IR Training Team will give you a call! Everyone these days is talking about losing weight and getting healthier, so I decided to compile a list of healthy habits and tips to help you get back on track.  Below is a list of 109 simple tips for you to implement into you and your family’s life.  I’d recommend reviewing the list and then starting to implement a habit or two per week. This will keep you and your friends busy for the rest of the year!

Every tip is a link to a helpful article, enjoy!

109 Ways to Radically Improve Your Health, Happiness and Productivity

So, there you have it.  109 ways to help you live a better life.  I hope you enjoyed this list.

Did we miss anything?

Leave a comment and let us know about any other great articles or videos that have inspired you to improve!! If you’re like two thirds of working Americans, you pick up lunch from a fast food joint or restaurant at least once a week. Sure, it’s not as healthy as packing your own lunch, but eating out every once in a while can’t hurt, right?

Not so fast: You’re Dead Wrong!

Not only could the window worker pile an entire day’s worth of calories through your car window with one serving, but soon after you will be sucking your energy and productivity right back out that window: Carb overloads lead to energy spikes and crashes, and studies have shown that the bigger your waistline, the lower your cognitive functioning and the more sick days you take.

Kind of ironic, considering “convenience” is the most common reason people give for buying lunch during the workday. In this economy, it’s hardly convenient to snore through the 2 o’clock meeting, or miss a few crucial days when the boss is looking for you.

A healthy lunch can help you maximize your afternoon performance, but if you’re in a hurry to grab and go, you might not take the time to sort through the menu hits and misses. Let the Eat This, Not That! folks be your efficiency experts: DON’T order the following items. Opt instead for less outrageous alternatives (also below), and reap the benefits at bonus time.

It’s hard enough to make the argument for one cheese Danish, but five? And we’re just talking fat, here — with more than 1,000 calories of the stuff in just one sandwich. You’re also be filling up with more than a day’s worth of sodium and saturated fat. While this is one of the worst items you could choose, the rest of the Quizno’s menu has hazards, as well.

But if your coworkers insist on eating there, order this:

Your smarter choice is to eat this instead:

And another hint for a healthy sit-down lunch: forgo the appetizers. Chili’s Texas Cheese Fries with Jalapeno Ranch Dressing made the top of our list when we rounded up the worst appetizers money can buy.

Just because you could prepare it at home doesn’t mean it’s good for you when you order it away from home — the Roast Turkey Ranch and Bacon Sandwich packs nearly half of your daily allowance of calories and almost an entire day’s dose of sodium. Doesn’t leave much room for anything else, does it?

Talk about a value meal: one Chicken Strip Basket gives you two days’ payload of sodium! If thinking about it doesn’t elevate your blood pressure, eating it might.

You were on the right track in choosing Panera, but don’t be sidelined by the allure of the Italian Combo. Ciabatta bread may sound sophisticated, but you won’t look so refined when you’re lugging that spare Pirelli around your midsection.

The good news about this tortilla is that it contains 57 grams of protein, but that’s hardly worth the outrageous calorie and carbohydrate load — with 100 grams of carbs, you’ve already covered a third of your recommended daily intake, plus you’re taking in nearly a day’s worth of sodium and saturated fat. Downsize to drop pounds.

(Another hint: When it comes to Chipotle chips, just say “no.” They add an outrageous 570 calories and 73 extra grams of carbs.)

It’s called Monster for a reason. It’s a monster load of saturated fat (more than two days’ worth). The good news is that it has a friendlier, healthier cousin in the 1/3-lb Low-Carb Thickburger, with 1,000 fewer calories and a third the amount of fat. Even better, the Low-Carb Thickburger is true to its name — it only has 5 grams of quick-burning carbohydrates, compared to 46 grams in the Monster.

You should know by now not to order a triple anything. In this case you’re getting egregious calorie, fat, and sodium overloads. Choose a regular cheeseburger instead and slash 900 calories, 66 g of fat, and save yourself from the judgmental stares of your coworkers, who are three times as likely to be grossed out!

Innovative Results has Orange County Fitness Trainers  that can guided you with more Help, Motivation and Healthy Fitness Tips. Learn how to make good choices in your daily life through fitness, nutrition and mindset.